How competitive is UIUC computer science admission? A quantitative study of Indian applicants 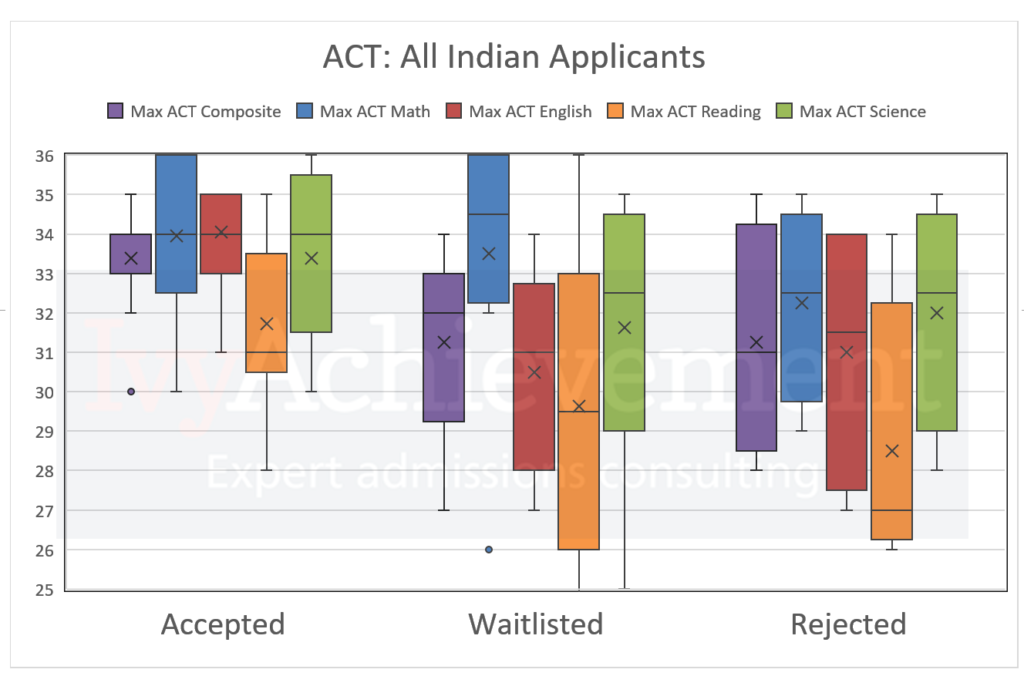 The University of Illinois at Urbana-Champaign (UIUC) is the flagship state school of Illinois, the fifth-most populous state of the United States. With an overall freshman acceptance rate of over 65%, it is less selective than other state schools, such as University of Michigan – Ann Arbor (24%) and the University of California, Berkeley (17.5%) . However, it has a top-ranked computer science graduate program: UIUC computer science is ranked #5 in U.S. News and World Report, behind only MIT, Stanford, Carnegie Mellon, and UC Berkeley (all tied for #1).

Selecting schools to apply to is a daunting task, and for students who choose schools based on rankings readily available on the Internet, UIUC is an attractive choice. UIUC reports that international students make up over 15.7% of its undergraduate student body, which is more than the 14% of American undergraduates who come in from out-of-state!

I work with a large number of international students, the majority from India, including Indian expatriates in the United Arab Emirates, Bahrain, Singapore, and Indonesia. I have spent over five of the last 12 months in India, meeting with clients, conducting events, and establishing a presence there. I am also very active on Facebook groups for Indian applicants and interact with them daily. This gives me the unique opportunity to collect and share admissions data with them.

As I discovered counseling Indian students, UIUC gets a lot of applications from India. I aim to be able to guide future clients regarding whether to apply and perhaps demystify the “black box” of admissions for them. A few days ago, just after UIUC announced its regular-decision results, I circulated a poll online and directly to clients who applied to UIUC. The poll was originally tailored for Indian students, and now includes American grading systems as well. So please fill it out!

The poll collected admissions results (early action/regular decision and accepted/waitlisted/rejected plus honors); standardized test scores (including old and new SAT, ACT, SAT Subject Tests, APs, TOEFL, and IELTS); and grades from various curricula in use in India and elsewhere. These included the Indian Central Board of Secondary Education (CBSE), the Indian Certificate of Secondary Education (ICSE), the Cambridge International General Certificate of Secondary Education (IGCSE), International Baccalaureate (IB), and others. (Wading through the alphabet soup will be the topic of a future post!) Optional information included a description of extracurricular activities and an opportunity to upload the 400-word UIUC essay.

The poll has received over 85 submissions. After eliminating fake entries and disregarding (for now) data from outside India and from other admissions cycles, I was left with 79 submissions. I can’t be sure this is a representative sample, but the data suggests it’s pretty close. My feeling is that there is probably a slight under-representation of those who were rejected, but the accepted and waitlisted respondent sample accurately reflects the Indian applicant pool.

First, I wanted to figure out how big of an impact GPA has on UIUC admission. UIUC is one of the few schools that does not ask Indian students studying under a national or state curriculum for 9th or 11th grade scores, so 10th grade board scores are the only grades UIUC takes into consideration. (UIUC doesn’t even ask Indian applicants for transcripts or coursework.) In the CBSE system, students take six nationwide exams and the five highest are counted. Each exam is given a grade of A1-E2, which is converted to a 10-point scale. GPA is the average of the top five exam scores. 50 of the 79 submissions came from Indian students in CBSE schools. To my surprise, there was no correlation whatsoever between GPA (which is on a 10.0 scale) and acceptance rate:

I was also surprised that the lowest CGPA reported was 8.8. After we collect more data, I will run analyses on other grading systems.

So if grades don’t matter, what does? It turns out that admission at UIUC is highly dependent on test scores. 47 of the 79 responses included SAT scores. I converted old SAT scores to the new SAT equivalent using the official College Board score converter. To produce less “granular” data, I grouped scores into 30-point range “bins” (1570-1600, 1530-1560, 1490-1520, etc.) and plotted the midpoint of each “bin” against the acceptance rate. Unlike the CGPA analysis above, the analysis shows a nearly linear correlation between SAT score and admission. 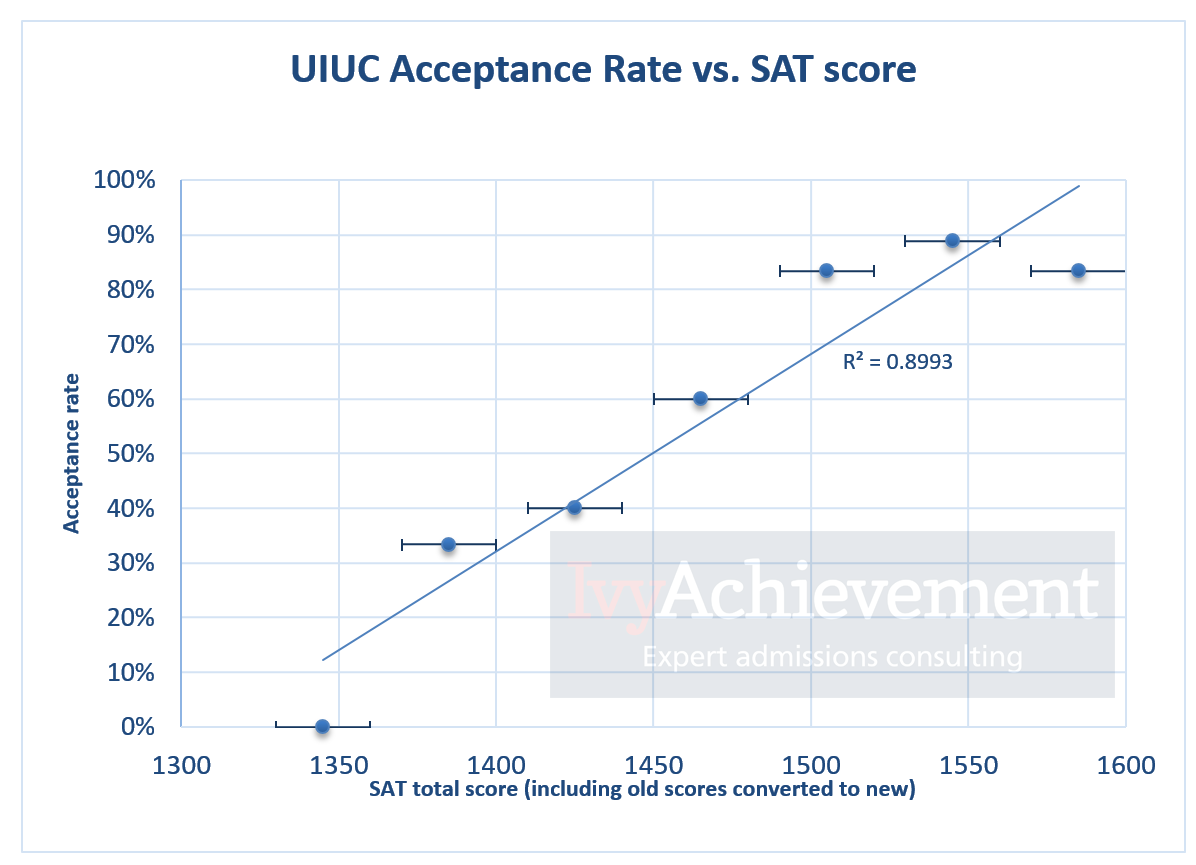 But the composite score is only part of the story. The SAT has two main components: a Math score and an “Evidence Based Reading and Writing” score, each scaled to 800 points. With the data we collected, I generated a “box and whisker” plot. Each box is bounded on the top and bottom by the 75th and 25th percentiles, respectively. The horizontal line inside the box is the median and the “x” is the mean. The “whiskers” extending upward and/or downward represent the range of the data (minimum and maximum), which may exclude “outliers” which are represented by dots outside the whiskers. If there are no outliers, that means all scores were within the boxes and whiskers. 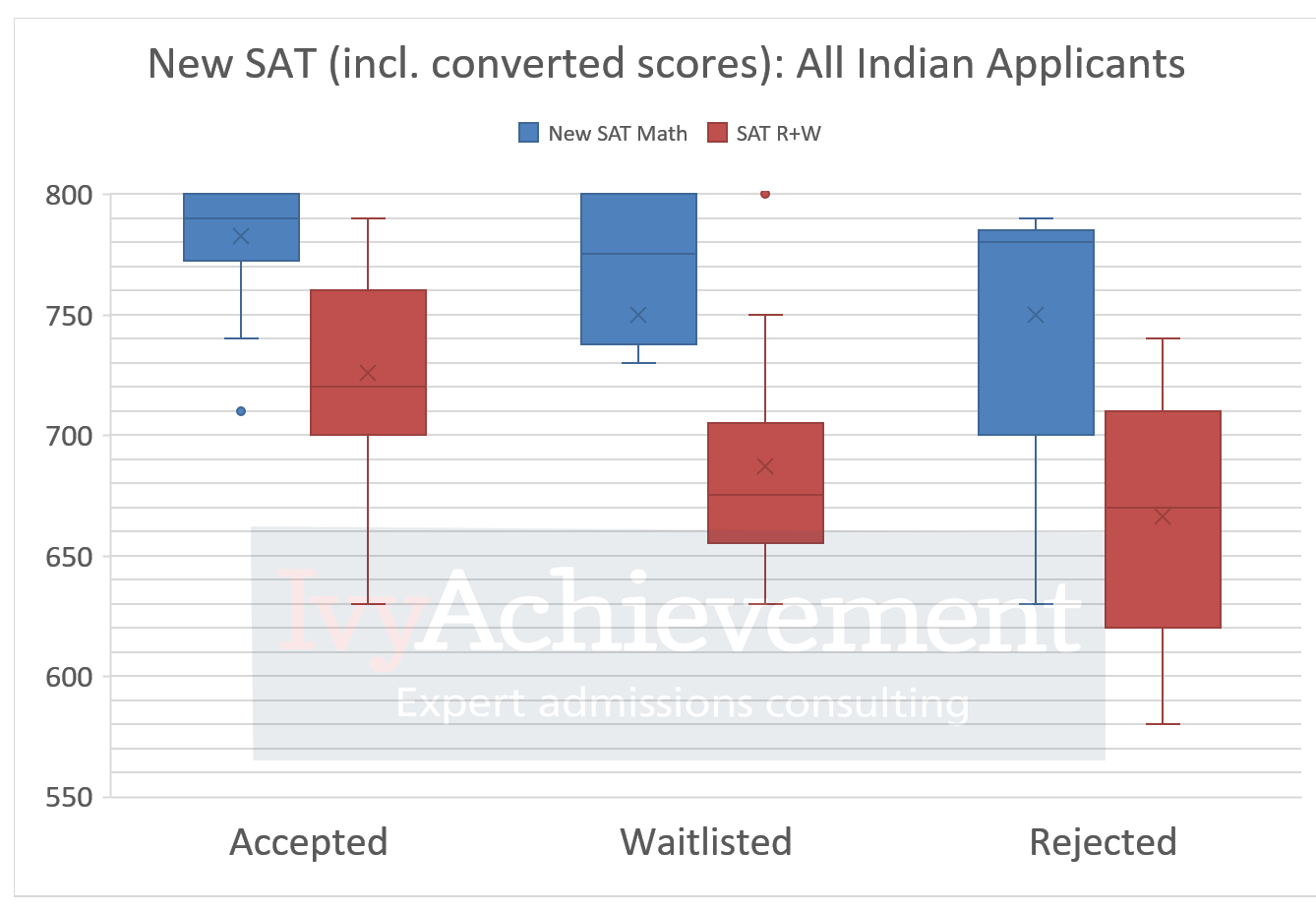 Accepted applicants were very strong, with all accepted applicants scoring at least 710 in Math (all but one 740 or above) and 75% scoring at least 700 (or the equivalent old SAT components) in Reading & Writing. Waitlisted students had a slightly wider range of Math scores (still near the top), but their Reading & Writing scores were lower: the median for waitlisted students was 675, as opposed to 720 for accepted students, and the 75th percentile for waitlisted students was just above the 25th percentile for accepted students (705 vs. 700). For currently enrolled freshmen, UIUC reported a middle 50% for Math at 700-790, Critical Reading at 570-680, and Writing at 590-690. This is approximately equivalent to 740-800 Math and 640-720 Reading & Writing on the new scale. Nearly all Indian applicants who filled out our poll scored at or above these new-SAT 25th percentile equivalents. Rejected students had a range of scores, but tended to be lower.

How much more difficult is it to get into computer science at UIUC? UIUC allows applicants to select two majors; the first choice is mandatory (but can be “undeclared”) and the second choice is optional. Because of UIUC’s strong reputation, UIUC computer science is a popular major choice for applicants, especially those from India:

More than half our respondents applied to computer science, computer engineering, or some interdisciplinary major including computer science (referred to those discussing admissions as “CS+X”). 13% of Indian respondents applied to “CS+X” majors. Mechanical and aerospace engineering took up a combined 16%, and the remaining majors 4% or less. Half of Indian applicants didn’t choose a second major, and another 18% went undeclared: 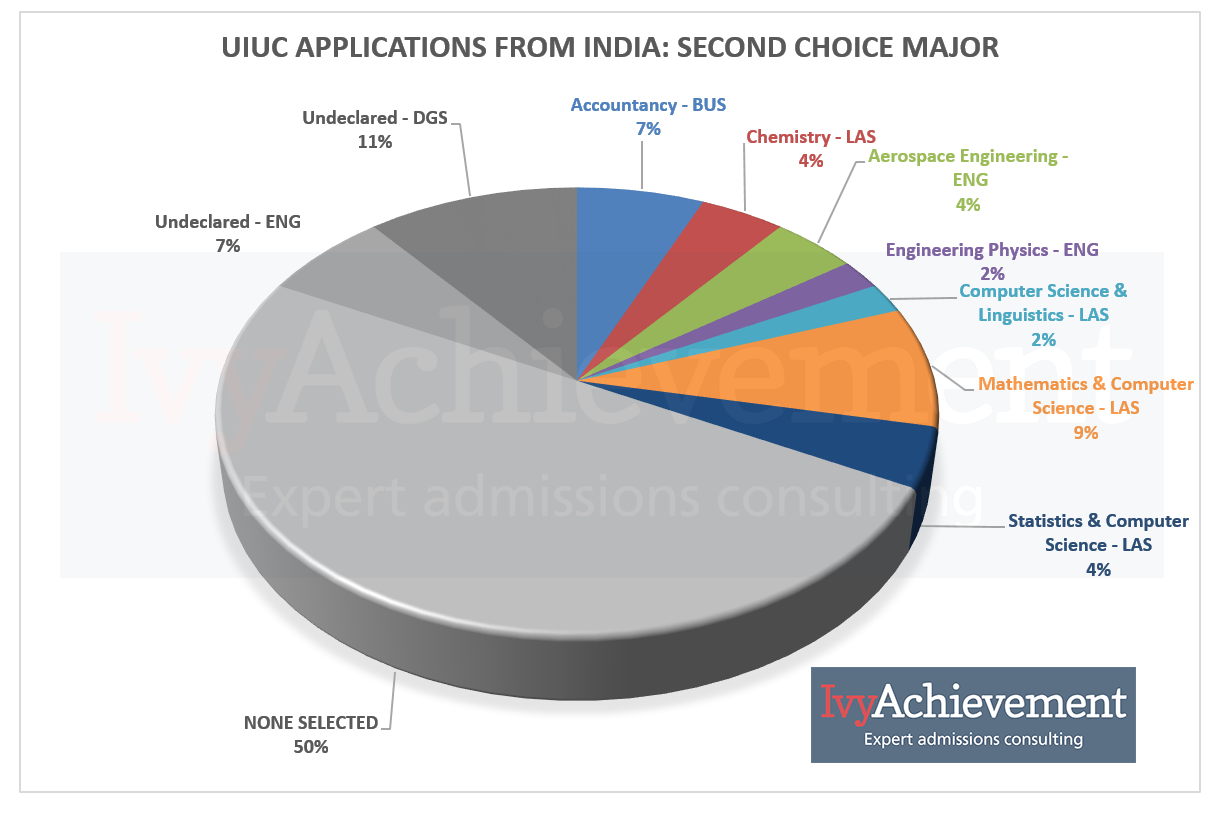 It turns out the UIUC computer science program is indeed more selective than admissions overall: 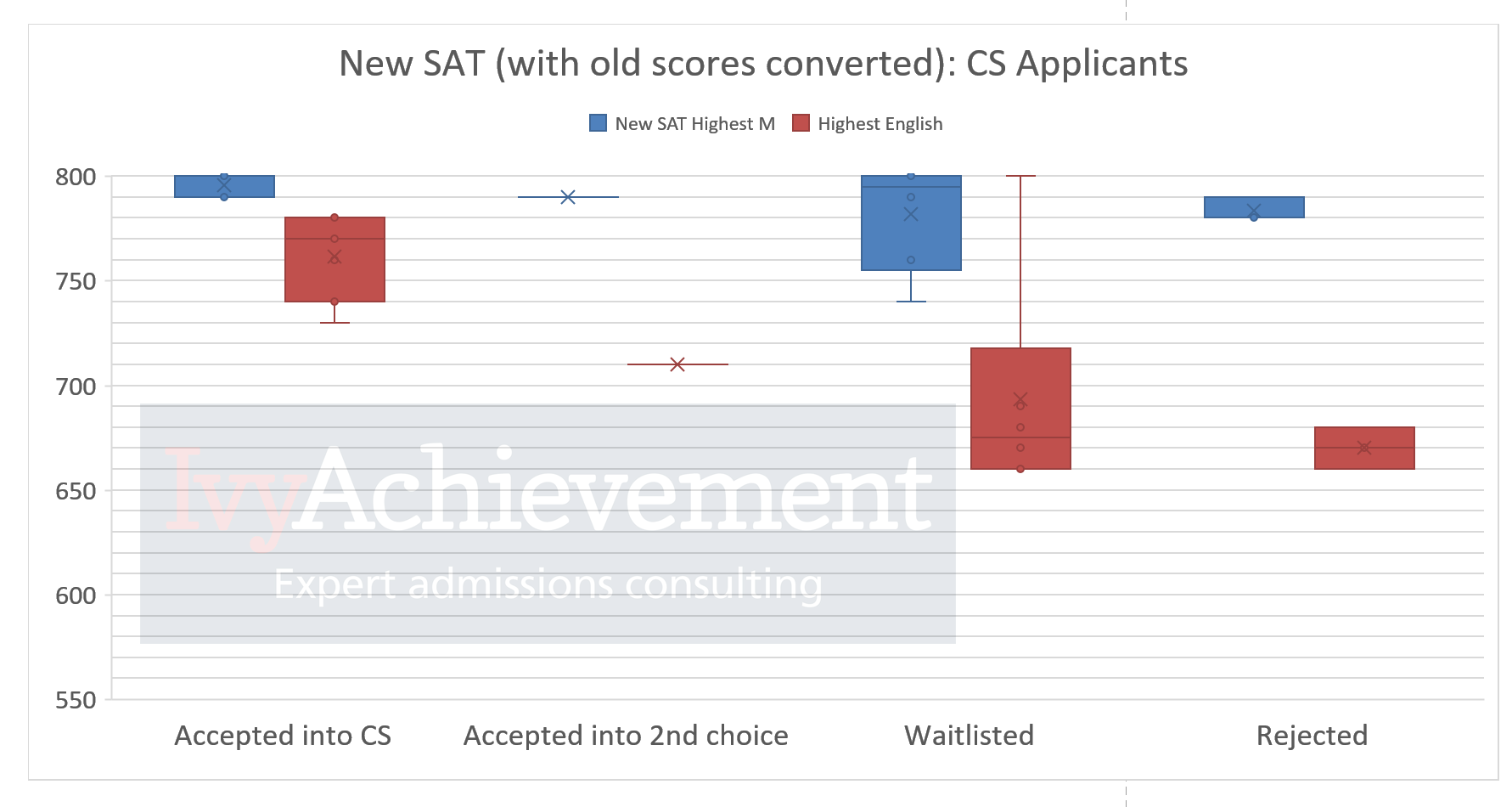 Seven respondents from India who were accepted into the UIUC computer science program provided SAT scores. All seven had a 790 or higher in math (or the equivalent on the old SAT). ACT results were not much different: 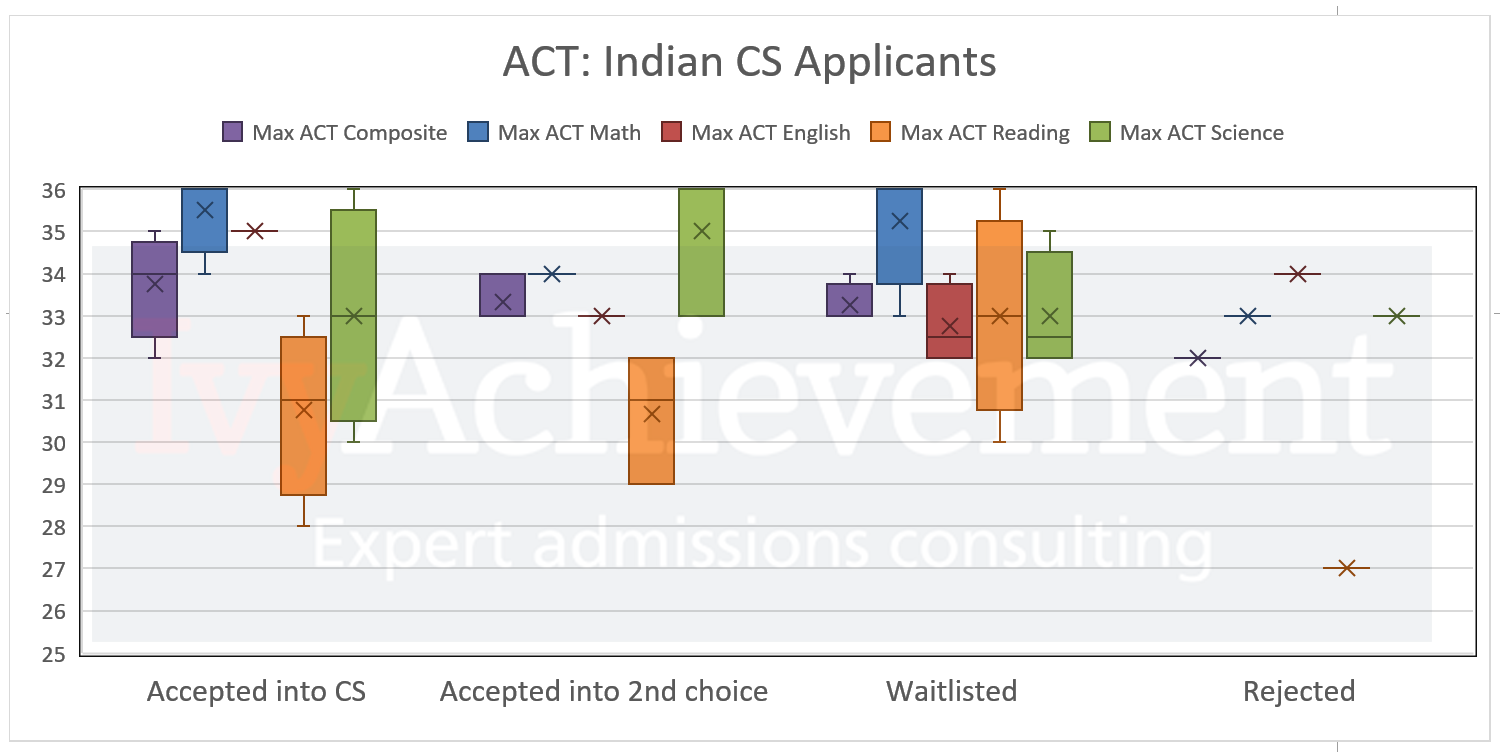 Waitlisted and accepted applicants both achieved high math scores, with accepted students sitting at the top of the range, and waitlisted students scoring lower in English. Notably, accepted students performed more poorly in Reading. The ACT Science score does not appear to have been a factor in admissions either. Only one CS respondent who took the ACT was rejected, which explains the sparse data. Once we collect more data, a full ANOVA (analysis of variance) will yield more information. 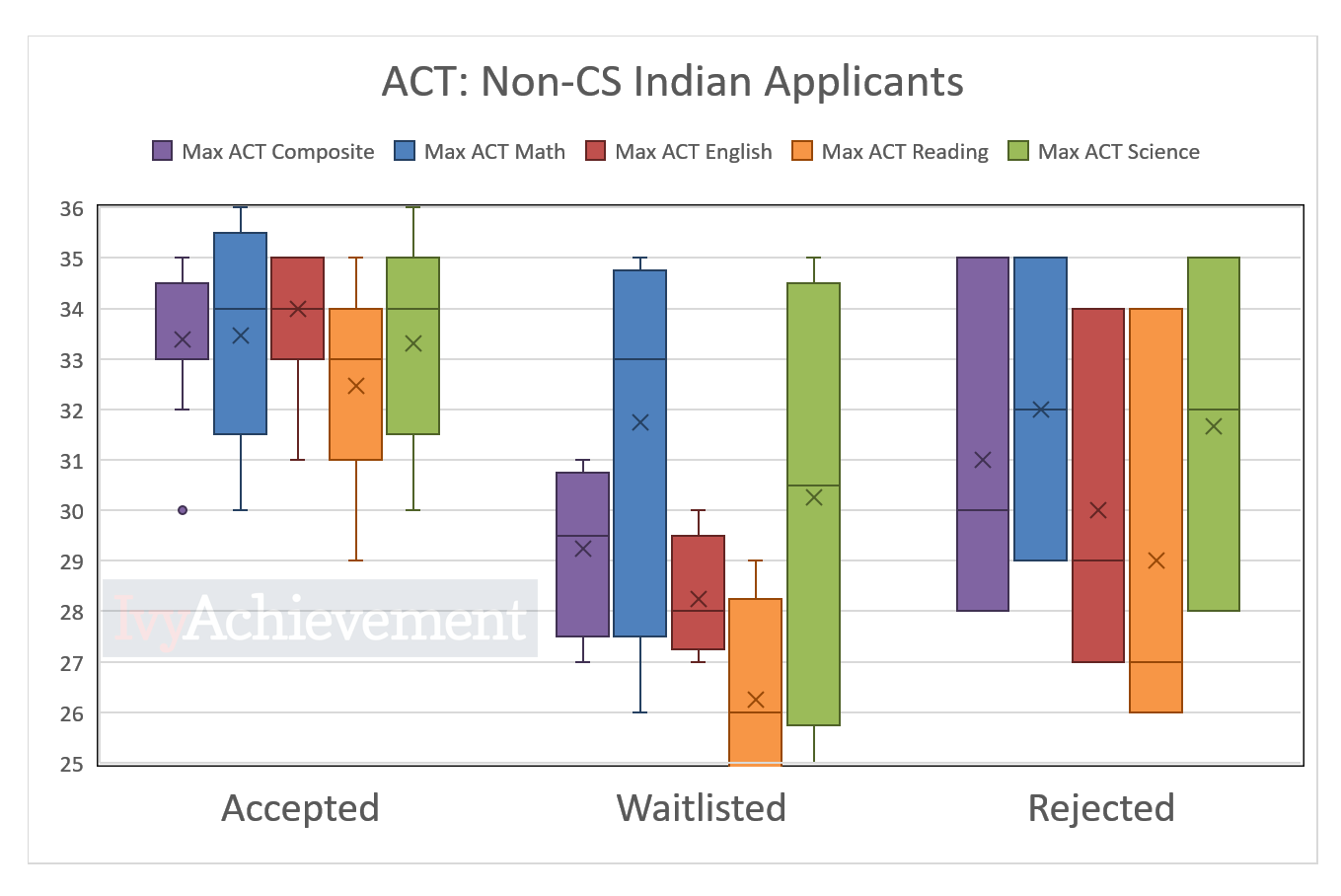 Over half our respondents applied to a computer science or “CS+X” major, so their data weighs heavily in the above charts. What happens when we isolate non-CS applicants?

The non-CS acceptance rate among our respondents, 75%, is higher it is for non-CS majors. 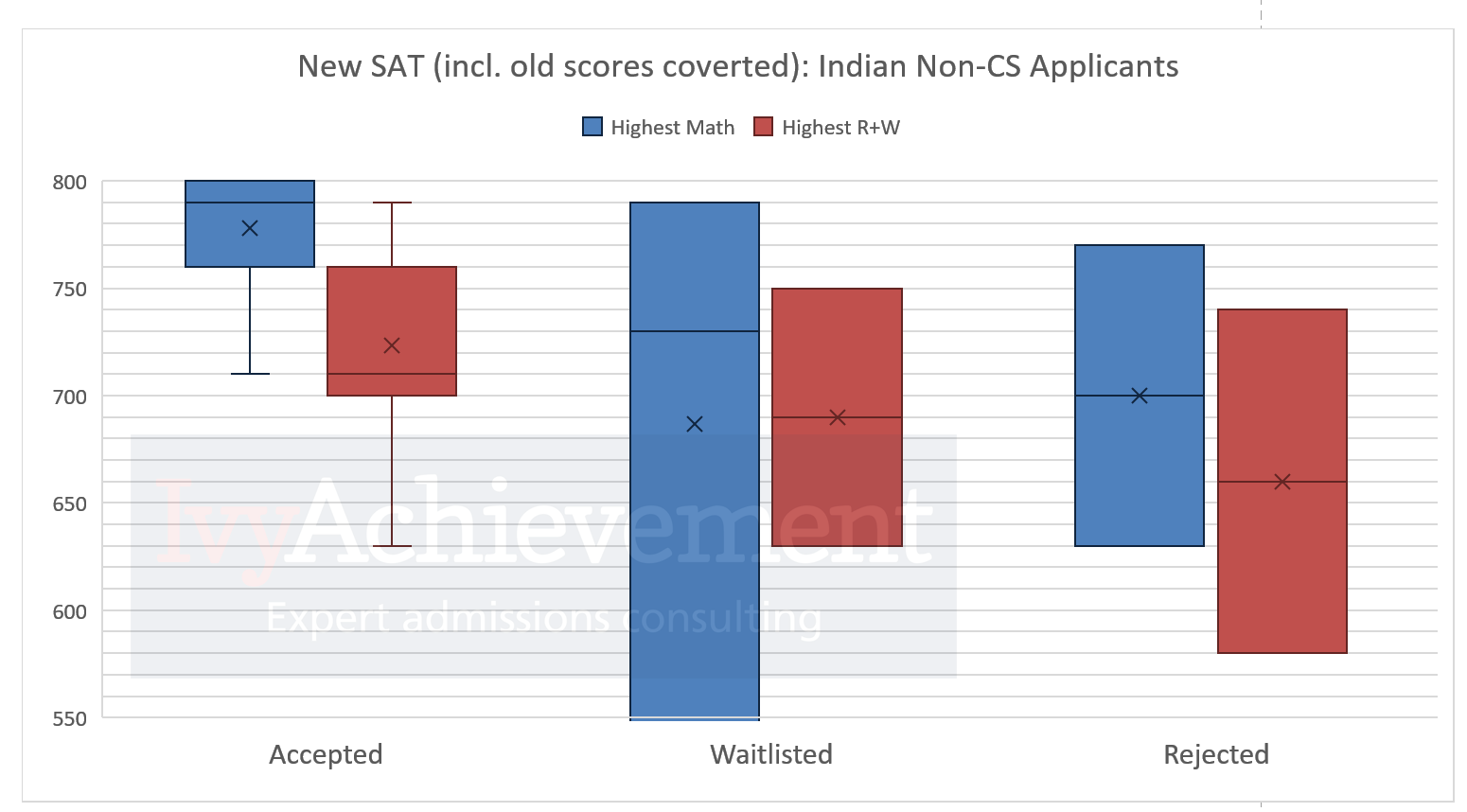 The data pool for non-CS students is smaller, and the accepted student pattern is similar to that for UIUC computer science, with very high Math scores and lower Reading & Writing scores. Scores don’t need to be as high outside CS: the median reading and writing score for non-CS accepted applicants is 730, as opposed to 770 for CS offerees. Another big difference between CS and non-CS is who was able to make the waitlist. Some students with low scores managed to avoid being denied admission. 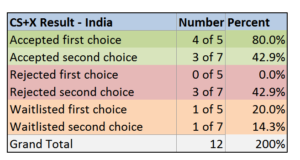 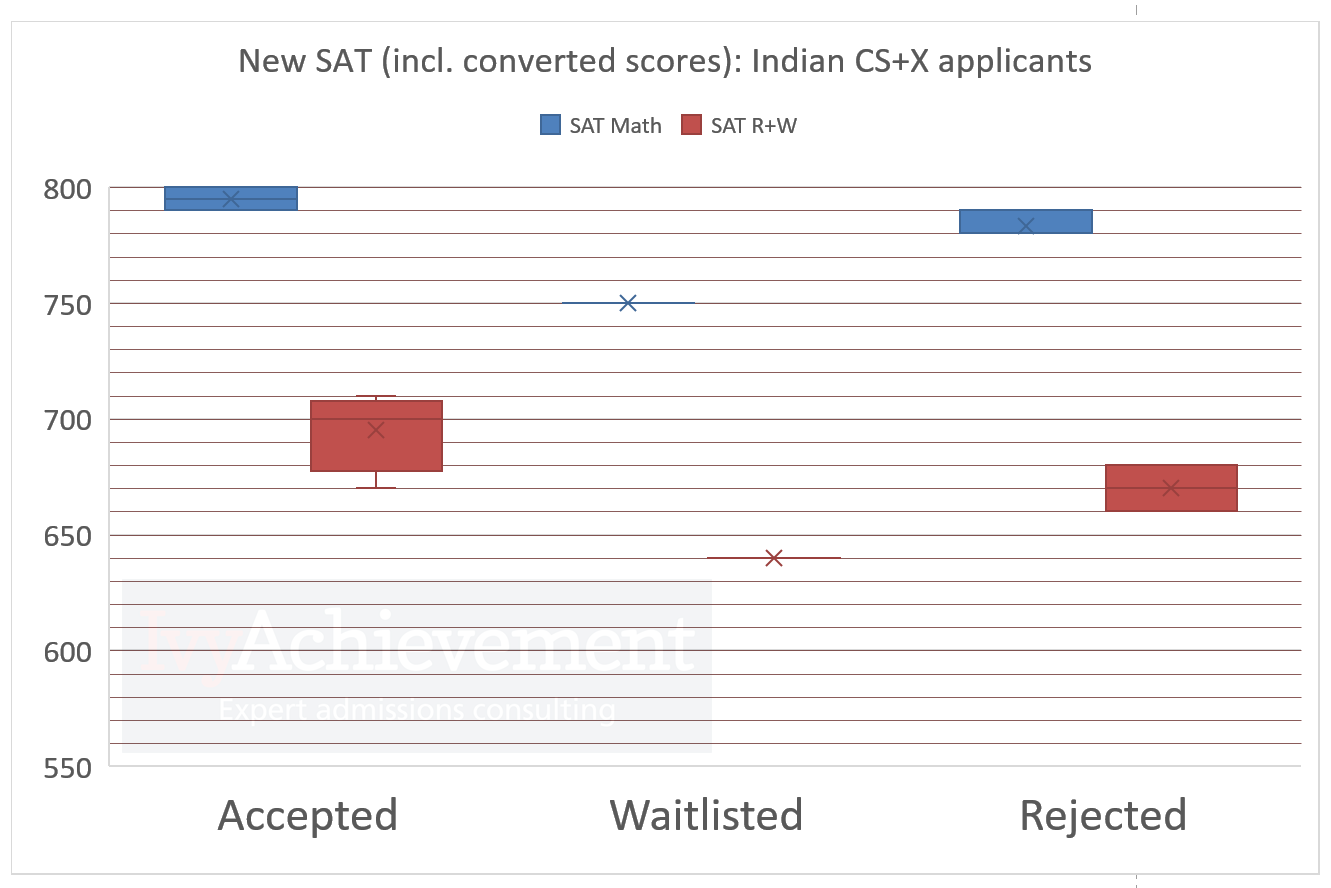 There were only a few CS+X applicants who took the SAT, and they all scored in a narrow range. All had 790 or 800 (or equivalent) in math, but their reading and writing scores were lower than even the non-CS admitted applicants’. Unfortunately, there is still not enough data to yield conclusive results, and we can’t yet do a meaningful breakdown of different CS+X majors. So if you applied for a CS+X major, take our poll!

UIUC considers only a few variables when evaluating Indian students. UIUC does not accept letters of recommendation, its essay is limited to 400 words (shorter than other schools’) and the application asks for a limited number of grades. The application also has very limited space for describing extracurricular activities. This makes analyzing admissions relatively easier compared to other schools.

I would love to do analyses of other applicant populations, so please circulate our poll, which may be filled out anonymously:

I believe that being well informed about admissions gives applicants an edge, and I look forward to continuing to demystify the application process. For now, potential applicants to UIUC computer science and other majors will have some data to “chew on.”